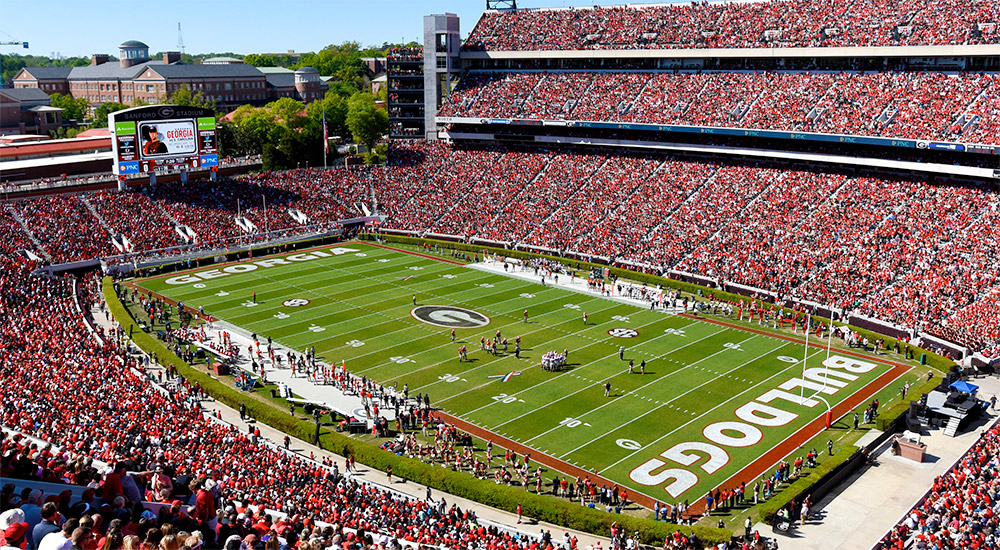 “I have played in many stadiums, but to me, there are only two special stadiums – Yankee Stadium in New York and Sanford Stadium in Athens, and there is no comparison between the two. There is no place in the world precisely like the grass that grows between the hedges in Athens, Georgia”, quoted by Fran Tarkenton, former NFL quarterback, TV personality, and computer software executive.

Thanks to its carefully architectured design, the Sanford Stadium is most often referred to as the “most beautiful on-campus stadium” along with its view of rolling hills on the open west end-zone and Georgia’s campus. Meanwhile, it is worthy to mention that the crowd at the stadium is one of the best crowds as they cheer the loudest and can easily make anyone feel overwhelmed with their passion for the game.

“Between the Hedges” is a term used for games that are played in Sanford Stadium. The reason for this is due to the field being surrounded by privet hedges. These hedges have been a part of the architectural design of the stadium since it was opened in 1929. New hedges were planted in 1996 after the originals were taken out to accommodate the 1996 Summer Olympic’s soccer game. The idea to put hedges around the field came from the Business Manager of the UGA Athletic Department, Charlie Martin. Martin claimed to have received inspiration for the idea during a visit to the Rose Bowl, where he saw the hedge of roses in that stadium. Roses were not a suitable choice for the climate in Athens, so privet hedges were used instead.

The hedges that were added was not just for beauty purpose. They are proven to be (though may not be intentional) a great way to controlling the crowd. Despite not being clear in photos, the hedges are a growing like a chain link fence, which stops fans from pushing through the field.

Both Athens and the University of Georgia are located where they are because of the spring that gives Spring Street its name. They are situated between two rivers (the North and Middle Oconee) that today supply the entire city with fresh water. There are creeks running between and underneath Sanford University. In fact, there are five watersheds on the UGA campus: Tanyard Creek, Lilly Branch, Founders’ Spring, the Steam Plant Stream, and Lake Herrick. In 2016, the Watershed UGA initiative aims to put a spotlight on these hidden waterways and encourage their restoration and protection.

Why the name Sanford Stadium? The Sanford name originates from Dr. Steadman Vincent Sanford, an early strongman behind University of Georgia (UGA) athletics.IN 1903, he arrived at UGA as an English instructor and later on became the faculty representative to the athletics committee. Ultimately, he became the president of UGA and Chancellor.

The university’s first football field, Herty Field, was moved in 1911 by Dr. Steadman Sanford. To honor his contributions, the newly moved field was named after him as Sanford Field after it was moved to the center of the campus. It was later on renovated in 1927 after a series of controversial games against in-state rival, Georgia Tech. As the field was at UGA was too small to accommodate large crowds, UGA was forced to travel to Atlanta to play in Tech’s Grant Field. There were also rumors that Tech would water the field all night long to slow down UGA’s running backs. This rumor was due to the fact that the undefeated Bulldogs lost to Tech by 12-0. The devastating lost pushed Sanford to build a stadium bigger than Tech.

Not long after their loss, Sanford came up with a tenacious plan to fund his vision of building a larger stadium than Tech. His idea was to make members of athletic association sign notes guaranteeing a bank loan to fund the stadium construction. In return, these guarantors would be granted lifetime seats and, guess what? The response was overwhelming! By 1928, a loan of $150,000 supported by fans and alumni allowed construction to begin. However, the total cost of the construction was at $360,000.

The first game held at the new Sanford Stadium after its completion was against Yale, which at that time was the perennial powerhouse. It was also Yale’s first ever football game played in the South. 30,000 fans paid $3 per ticket to watch the Bulldogs defeat Yale at a score of 15-0 on October 12, 1929. Almost everyone from the South attended the game; including officials from all nine southern states. It was a historic moment for the both the Bulldogs and Sanford Stadium.

As a diplomatic act of kindness, Yale donated half of their game receipts to UGA to help pay off the construction loans. The act of kindness helped tremendously to repay UGA’s loan in just five years.

Dr. Sanford attended every game at Sanford Stadium till the day he died, which was on 15th September 1945.

For further information on the Sanford Stadium at University of Georgia, visit the pages listed below.

Ticket Policies:
For information on ticket guarantee and on our preferred ticket marketplace please view the Sanford Stadium tickets page.